Those Who Affected Me 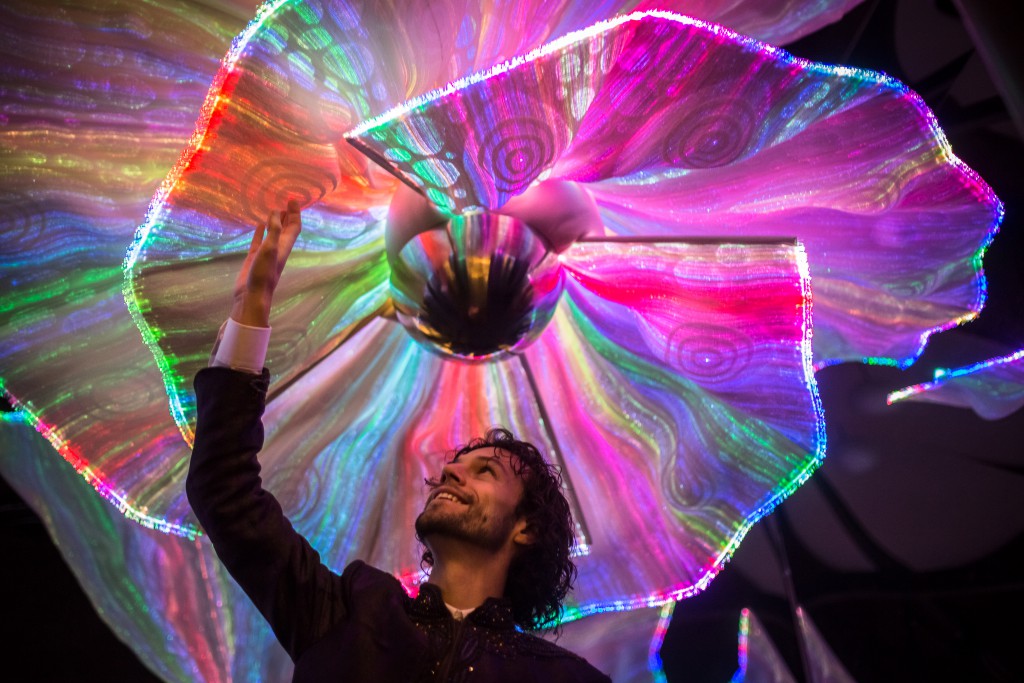 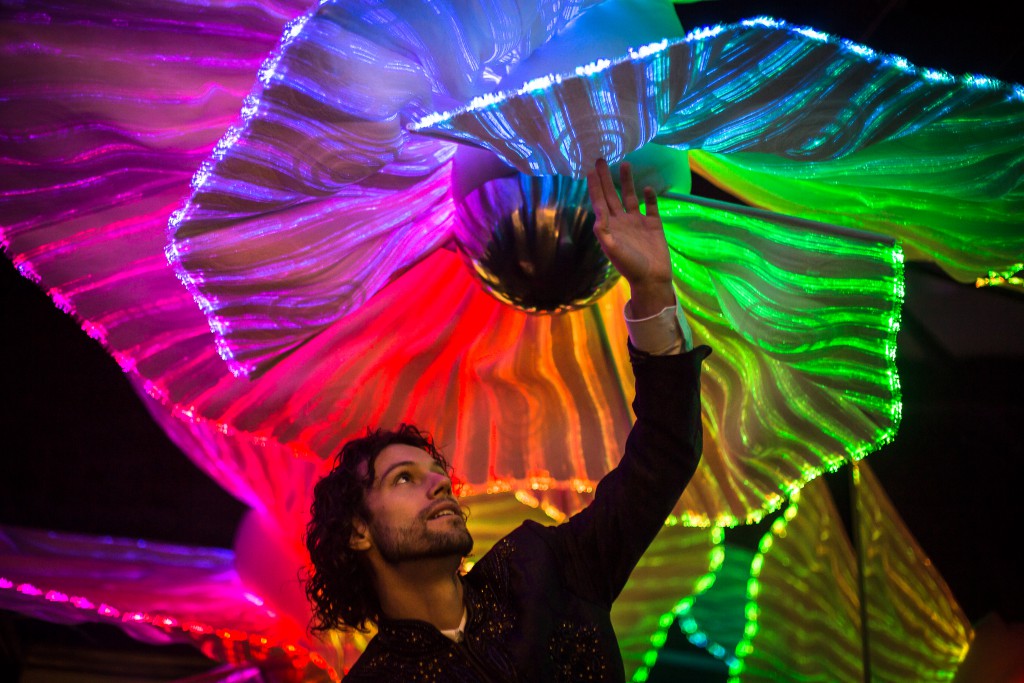 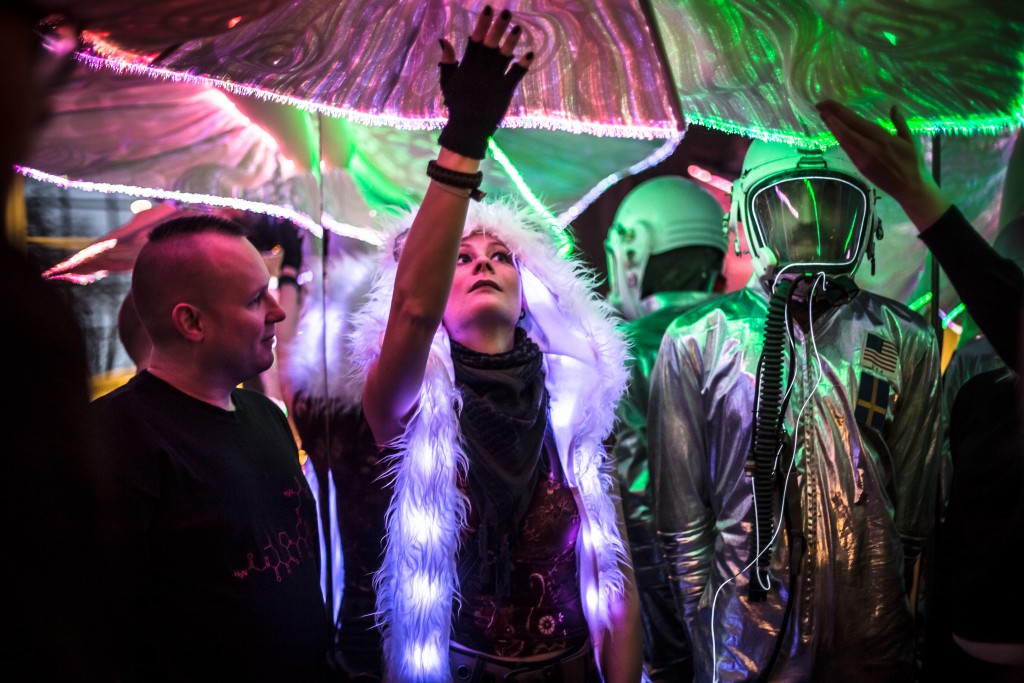 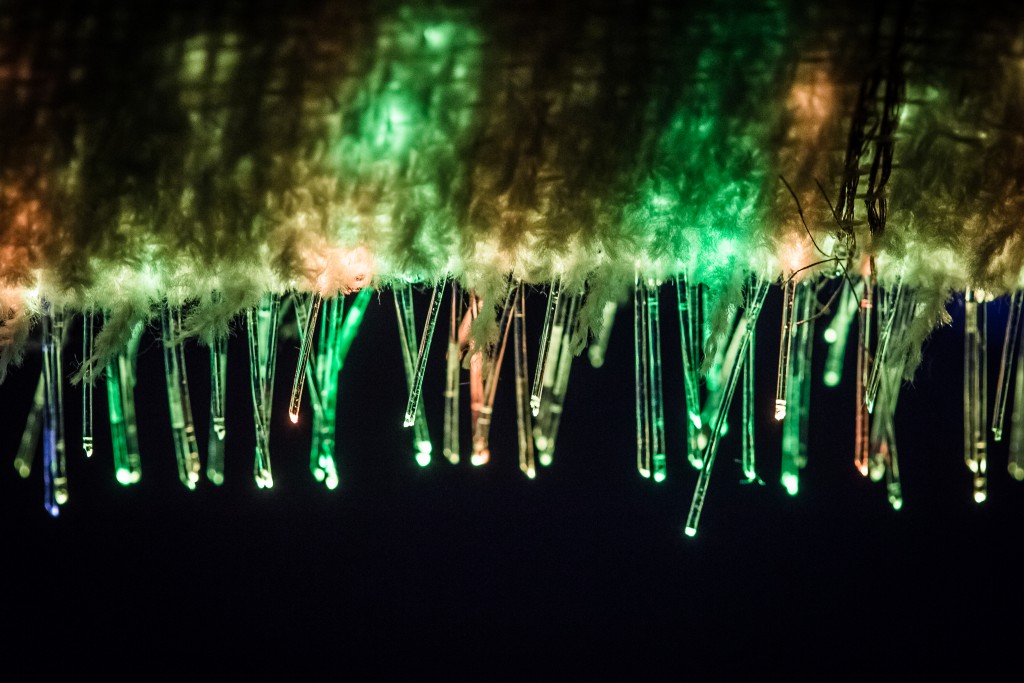 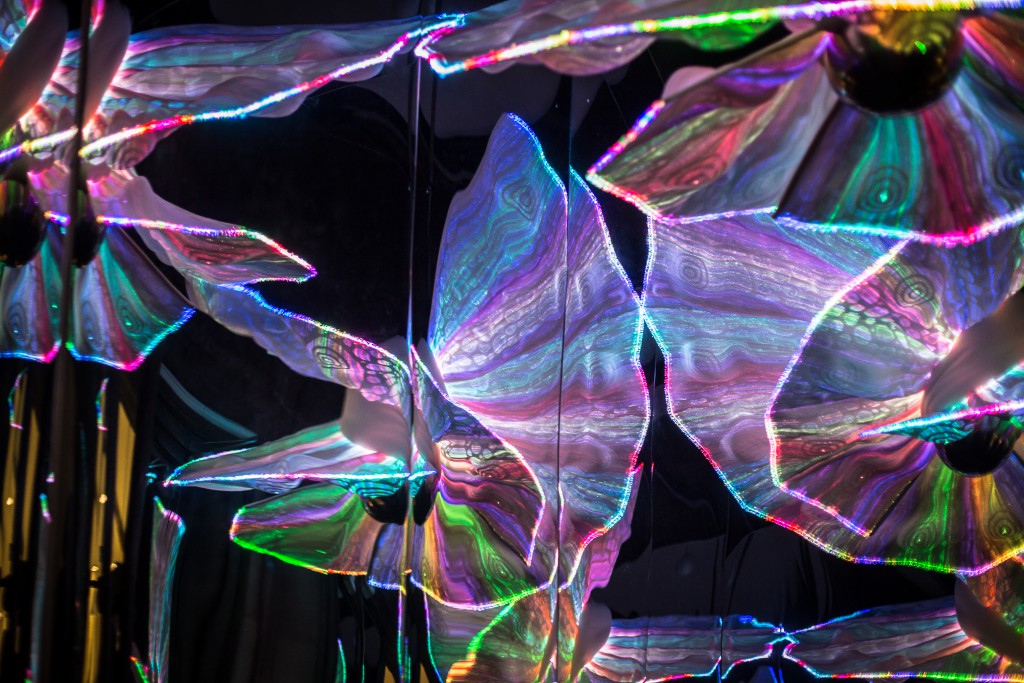 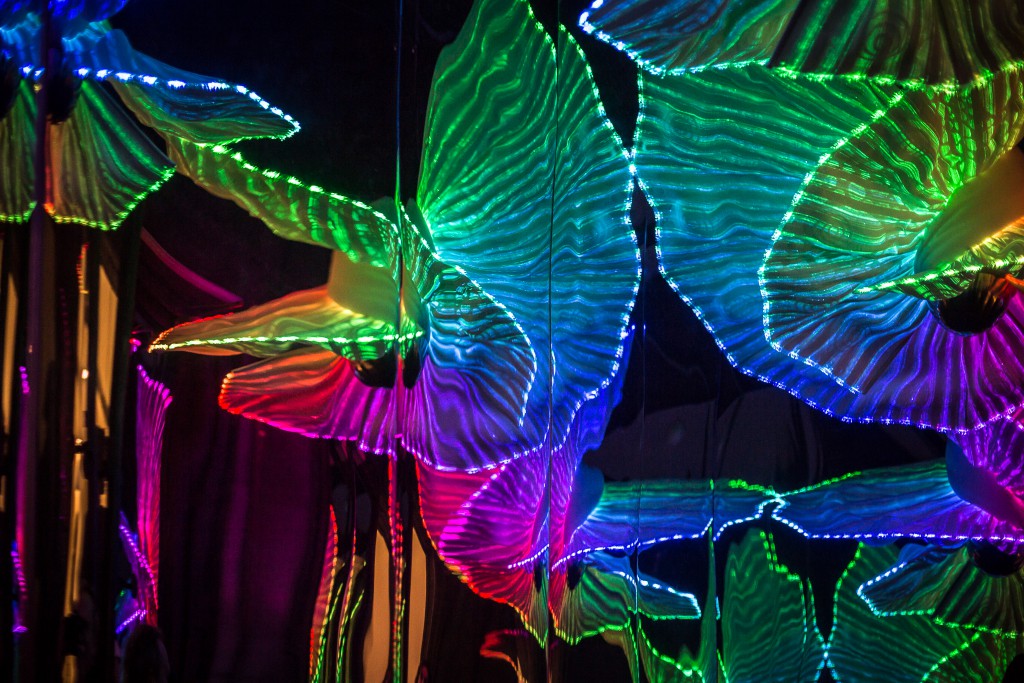 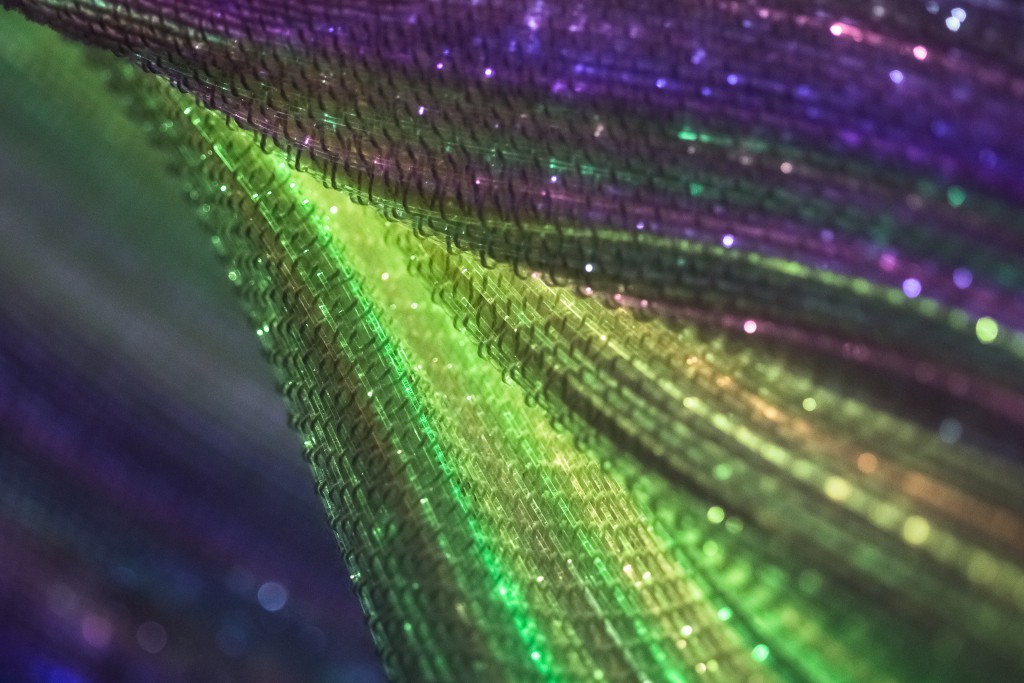 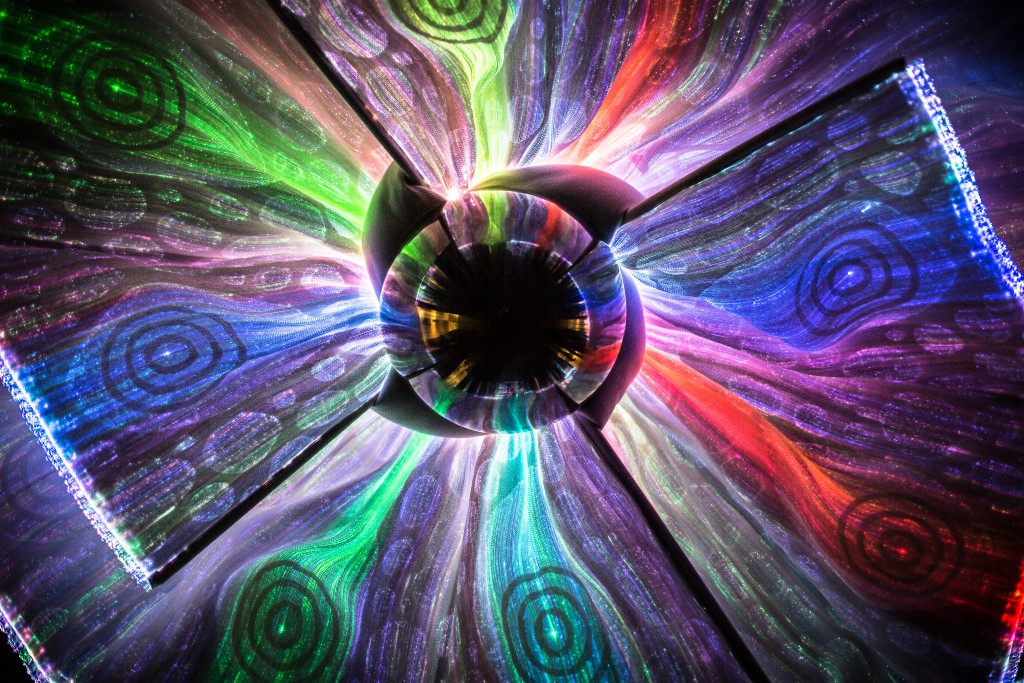 Those Who Affected Me

Those Who Affected Me is an interactive light emitting textile art installation. Suspended in mid air, over 1,5 meters tall, and 2,5 meter diameter, the four winged structure invites the audience to gently touch the textile and reacts by sending colorful ripples up and down the intricate fabric.

The custom designed jacquard textile is using optical fibers connected to about 500 individually programmable color LEDs, connected to a microcomputer. Thin, electrically conducting copper threads are woven in to create touch sensitive areas inside the fabric. The 11 meters of fabric are mounted with steel rods around a steel cylinder.

The sculpture is exhibited in an small room with tilted mirror walls, creating a distorted universe where the sculpture is multiplied in infinity.
The project started off in winter 2015 as an idea of making an interactive fabric.
Textile is a very tactile material and it invites people to touch it. During the process of creating it, Malin Bobeck thought of it as a self portrait.
-The people around me are affecting me all the time, both mentally, physically and emotionally. They are creating me, if it weren’t for them I would not be here today. This is a tribute to them. It’s a reflection of how people affects me as touch affects the installation.
Malin Bobeck is 29 years old, born in Lerum, Sweden. She is educated at The Swedish School of Textiles in Borås, graduating in spring 2014. She was awarded funding from Innovativ Kultur in 2014 to work on her optical fibre textiles.

In December 2015 she was awarded the “Encouragement of Culture” from Sten A Olssons foundation with the motivation:

“For those who are accustomed to thinking of the woven fabric as something quiet and controlled, the encounter with Malin Bobeck’s work will be bewildering. Her textiles careen, sparkle and switch between different moods. They arouse curiosity and invite us to be tactile. In her still young artistic practice, Malin Bobeck aims to create changing spatial structures in which the latest lighting and interactive technology is combined with handicraft. She is part of a broad movement in craft and design that combines traditional methods with contemporary technology, in an inquiring and inclusive way. Her approach rejuvenates the craft and also creates a new and exciting context for the achievements of engineering science.”

Gallery – Those who affected me

The project was funded by Innovativ Kultur